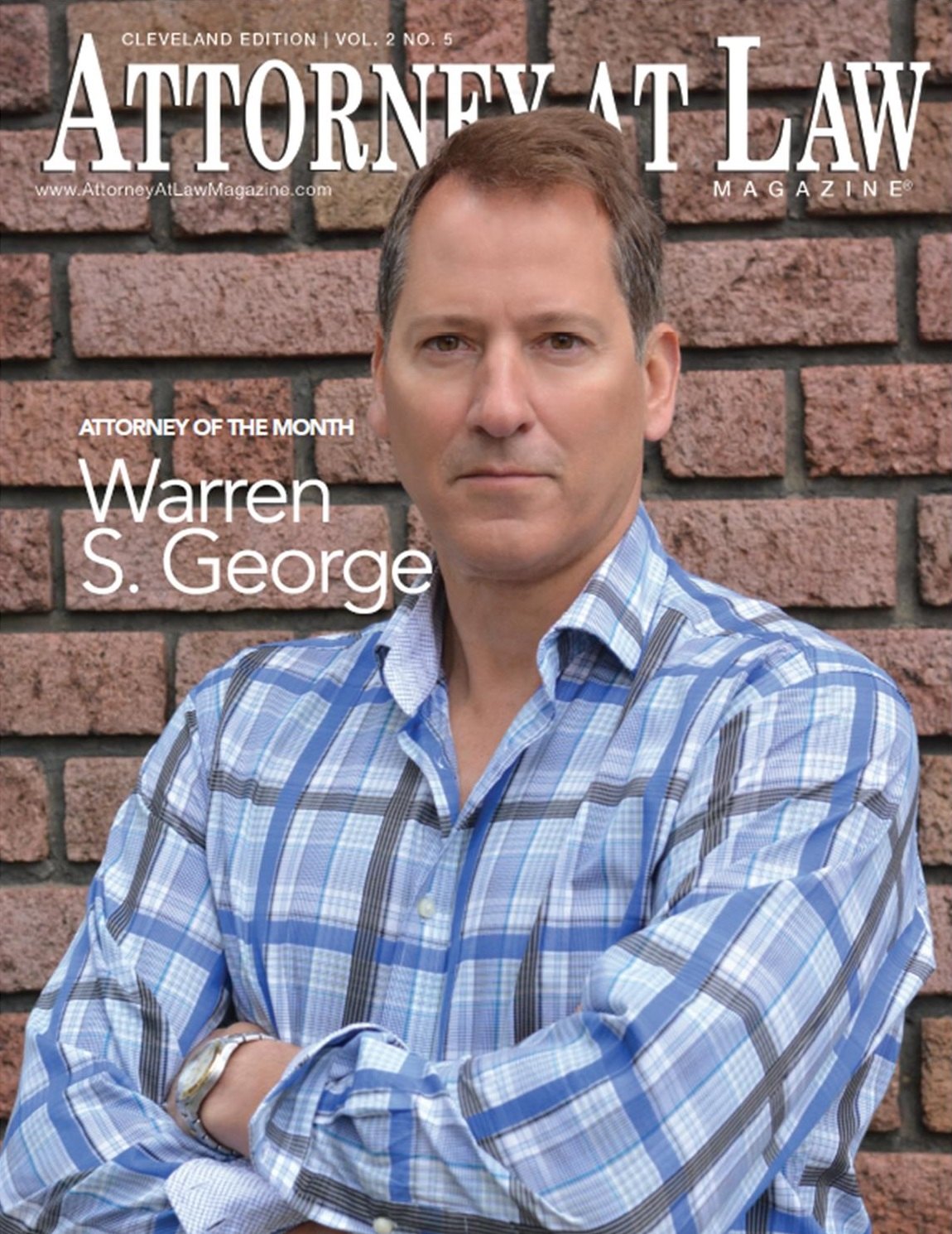 Click image to read or print article from Attorney At Law Magazine.

From the beginning, Warren S. George has been drawn to the legal profession. It was while visiting his older brother at law school in San Diego during high school summer break that he came to see a future in law for himself. Sitting with his brother and his friends, he would hang onto their conversations about school and the law.

“I thought, if my brother could do it, so could I,” George laughed.

During his undergraduate studies, George put his passion for the law to the test. He enrolled in business classes and computer science studies. None of those courses gave him the same feeling of connection and excitement as his pre-law courses. He knew he had made the right choice.

Nearly 30 years later, George is a partner at his own firm and has a reputation as a highly rated civil litigator in the state and federal courts. Clients rely on George not only for his legal expertise, but also as a candid colleague and loyal friend.

He was first hired to the law firm in 1989, then-called Uhlinger and Keis, two weeks before his bar exam results were to be released. According to George, Cullan J. Uhlinger was an “old school” lawyer, who knew the practice of law was learned in the courtroom. George had only been with the firm a few weeks when Uhlinger had him sit second-chair in a two-week jury trial. This gave George the opportunity to learn the law up close; a chance many litigators today are unable to achieve.

After seven years of dedicated work, George was made partner. Seven years later, the firm changed its name to Keis George LLP.

“The ‘glory days’ of plaintiff work has passed,” George said. “In the past, a plaintiff attorney could make a living off soft tissue injury cases. Now, the volume of those cases is considerably lower. Even defense attorneys have been affected. There are less filings and more settlements made in pretrial.”

The need for advertising has also affected the practice of law. “Back when I started practicing, we didn’t market our firm,” he said. “All of our cases came to us through word-of-mouth or through referrals. You earned cases because of the difference you made for your client. For me, advertising has become unavoidable. I believe that, like me, most lawyers feel uncomfortable marketing their services. It feels like bragging and that’s something I’m not good at.” George adds, “I’d much rather give clients results than rhetoric and facial make-up.”

For George, websites like Martindale-Hubbell and Super Lawyers, where peers rate peers, have made advertising easier, but still a difficult task to endure.

“The fact that my peers think so highly of what I can do, well, I take those honors to heart,” he said. “They reflect how my colleagues view me. It’s almost as complimentary as receiving a referral. That’s the greatest honor I can earn … even if I don’t like my face being everywhere online.”

In addition to peer-reviewed honors, George believes one of the greatest rewards of the legal profession is meeting clients and getting to know them. The fact that he is able to make a bad situation better is the best part.

“I consider myself a people person,” he said. “I take each case personally and try to give each one my all. There is a uniqueness to each case, but it’s also a continuation of everything you have experienced in the past. When your clients hurt, you hurt. When they have a question, when they need you, you need to be there for them. If you can’t be empathetic and use that empathy to evoke force, you shouldn’t be a lawyer.”

The business aspect of the practice of law comes second to the clients and their needs.

When asked about particular cases that have affected his career, George sifted through more than 30 years of cases. Each of which was so important to the individual client – the most important case.

He shared the story of one of the cases that touched him the most. He represented the family of a 36-year-old mother and fiancé. Her daughter was only 9-months old at the time of her death. She was killed when her car was rear-ended by a drunk driver who had prior DUI offenses and barely any insurance coverage.

Most attorneys would’ve pursued a case against the drunk driver only. Considering his past offenses, the case would’ve been an open and close case. George took a different approach. He sought a case against the owner of the vehicle, who entrusted the car to the impaired driver.

“We built a case against the owner because that was the individual who made the decision to give the car keys to the driver, allowing him to drive while impaired,” George said. “That decision was another factor that led to the death of this mother.”

With the support of the rest of the team at Keis George LLP, George wasn’t afraid to go after every source of compensation to cover the losses and future needs of her family.

The defendant tried to settle the case before trial, but George declined the settlement offer knowing that the amount was too low. By the end of the trial, the jury reached a verdict in the millions of dollars with other sources of income and adjustments awarded.

“I think that truly demonstrates our devotion to seeking justice for our clients,” he said. “We don’t accept low offers for the sake of settling a case or avoiding trial. We aren’t looking for a quick settlement. We’re not afraid to go to bat for our clients and commit to the long-term. It’s what I would want and I know that’s what my client wanted. So we did it for them.”

George has built a career on this commitment – the drive to represent his clients to the best of his ability and the best of his team’s ability drawing from their own experiences and legal adaption.

When he’s not in the courtroom, he enjoys fishing, golf, tennis and occasionally dirt bike trail riding. According to him, his competitive nature in all of his hobbies is a parallel to his approach to the practice of law. He is patient, technical and artful.

“I think practicing law is a lot like sports,” George said. “Look at fly fishing, for example. It’s a very patient and technical sport. Golf is also one of the hardest sports. People think you just have to swing a club and aim for the hole, but it’s not that easy.”

The law, according to George, is similarly challenging.

“It is demanding, of course,” he said. “But the practice of law is also very rewarding. If you truly love it like I do, you have to stick to it through the ups and the downs. This profession allows you to meet new people and help them. Really help them. Nothing could be as rewarding as the ability to help others.”

A photo sits in his office of a 30-inch steel head he caught with his son amid a foot of snow on a cold, damp Cleveland day. “That photo resembles the artful parallel of this profession and my love for sports,” he said. “Both led to the blissful career I have today.”

George attributes his dedication and pride to the legal field as a result of his mother’s upbringing. George’s mother and father were both born in a small coal mining town in Pennsylvania and neither parent obtained a high school education. When George was 8 years old, his father passed away, leaving his mother to raise her three children alone. His mother worked at a local Wendy’s to pay for his high school education at Lake Catholic and made college an option for her children. As a result, her children went on to become two lawyers and a journalist with her strong push for them to obtain an education and develop a strong work ethic. George stated that he owes his career to both parents, but especially his mother.

George also credits his 30-year partnership with Bill Keis, a relationship that has proven both a strong friendship and a successful business relationship, to this success. Lastly, George distinguishes his 22- year marriage to his beautiful wife, Lisa, whom he admires and relies on for unconditional support. To learn more about Warren or to schedule an interview, contact a media representative from our law firm.